Until this year, Tesla’s electric vehicles have largely been seen as toys for the wealthy and early adoptees. The Model 3 was supposed to change all that.

Model 3 is the first mass market Tesla, selling for about $35,000. Tesla already has about 435,000 orders, and if you raise your hand today, you can expect to wait until the middle of next year to receive it.

Or maybe longer. That’s Tesla’s big problem. It can’t get the Model 3 out the door of its factory in Fremont, Calif.  And that threatens not only Tesla’s reputation, but the future of electric vehicles in general.

Because of its unique market niche, Tesla has always gotten away with things for which other car companies would not get a pass. For one thing, Wall Street has been charmed by its eclectic founder, Elon Musk.

His company appearances and quarterly earnings cars are followed with the cult-like response that greeted Apple and Microsoft through the years. Its market capitalization swelled beyond anything that was supported by its sales performance, vaulting its value past General Motors.

To be sure, Tesla Model S, its $70,000 sedan, has received strong reviews and has a small, but rabid customer base. Model S heralded good things for Model 3.

That makes its current dilemma even more stark. Model 3. Tesla has been honest about its production problems. It told analysts to expect “production hell’ during the first six months of production.

But, Tesla is falling short of even the very modest production targets it set for the car. In August, Musk said Tesla would build 1,300 cars in September, ramping up to 20,000 a month by December. END_OF_DOCUMENT_TOKEN_TO_BE_REPLACED

Texas 2, Elon Musk 0. Why Tesla Can’t Get A Break In The Lone Star State

Texas is the country’s second-largest state in terms of population, with an estimated 27.4 million people. It ranks only behind California. And, it has long been known as a place where entrepreneurs are celebrated.

So, why is there so much bad blood between Texas and Tesla founder Elon Musk?

This past week, Texas brought back a $2,500 tax incentive for the purchase of an electric vehicle. That means Texans can receive up to $10,000 in tax breaks, including federal incentives, for purchasing a car that plugs in rather than runs solely on gasoline.

But, Texans will have to purchase something other than the country’s most famous electric vehicles. The incentive only applies to vehicles purchased from car dealers in Texas, and Tesla only sells online.

It’s tried twice to get the Texas Legislature to give it permission to operate the Tesla way, but it simply can’t get a break. Just a few weeks back, a Tesla-backed proposal to allow any automaker to sell to consumers failed to move forward..

To be sure, Texas has showrooms in Texas, as well as a service center, and there are Teslas on the road. But to own a Tesla in Texas, owners have to go through a multi-step process that includes buying the car online, paying state sales tax to Texas, registering the vehicle in Texas, and arranging financing if the owner isn’t paying upfront.

On the surface, the decision by Texas to keep out Elon Musk’s company makes no sense. He’s one of the world’s most notable figures, just the kind of go-getter that Texans admire.  If the legislature wants to give people a break to buy electric vehicles, why wouldn’t it allow Texans to buy the buzziest ones?

I talked about this last week on Texas Standard, the public radio magazine program heard on stations across Texas. Listen to my interview here. END_OF_DOCUMENT_TOKEN_TO_BE_REPLACED

Comments Off on Texas 2, Elon Musk 0. Why Tesla Can’t Get A Break In The Lone Star State

Massachusetts Bay Transit Authority announced this week it has begun selling “sesame rings” that can be used to pay for a rider’s trip, according to Boston Magazine. The rings are being produced using 3-D printers and have RFID chips that allow a user to “fist-bump” their way onto a subway or bus ride, the magazine reports.

Courtesy of The Ring Theory

Developed by students at MIT and Singapore University, the report said a successful Kickstarter campaign and support from the MBTA to develop the rings made them a reality.

With a swipe of the hand, riders can user their rings just as a pay as you go or pre-loaded metro card, without the hassle of searching for cards through wallets and purses. At only $25, the high-tech rings are also rather affordable, but will still need to be loaded with funds to ride the MBTA transit lines.

Boston Magazine reports that if rings are not your thing, riders could also soon be hopping on and off transit with the swipe of a “bracelet, smartphone cover or even key chains.”

Google Maps has taken to documenting much of the world’s roads, and even some more ambitious routes such as the Grand Canyon, but Cyclodeo is the first to begin documenting the world’s bike paths.

I particularly like the Golden Gate Bridge video, what a spectacular ride it would be. Explore the rest of San Francisco via bicycle here.

Cylodeo allows users to explore bike paths from their computer such the Golden Gate Bridge in San Francisco. One city at a time, Cylodeo has gone about filming and routing bike paths in about seven cities in Europe and the United States.

A virtual map allows users to choose paths from a bird’s eye view, then view the route through first-hand video. Handy statistics are also available including the time it takes to ride a route, average speed and distance. END_OF_DOCUMENT_TOKEN_TO_BE_REPLACED

Comments Off on Explore The World On Two Wheels, Online

Each week, NPR’s Ted Radio Hour, hosted by Guy Raz, explores unique topics based off Ted Talks, the short discussions on just about anything.

Ted Talks is a non-profit organization that holds conferences around the world with the slogan, “ideas worth spreading” in mind. Celebrities, scientists, philanthropists and more discuss topics of all types ranging from science and robotics to healthcare and disabilities.

To listen to the Ted Radio Hour interview with the hosts and in depth segments, visit NPR.

Below is a video of Janette Sadik-Khan’s Ted Talk. It has a fascinating insight into the ways large cities can redesign their streets to make them more pedestrian and transit friendly, without spending billions of dollars for expensive renovation projects.

Transforming The Way We Get Around, From Your Phone

When it comes to the way we get around, we’ve gone from owning to renting to summoning. And the way we think about transportation will never be the same.

Let me explain what I mean. For the past century, until about 2007, there was a pretty simple way that we used automobiles. We went out and bought them, or some of us leased them. If you wanted a car at your beck and call, you plunked down your money, and parked one on the street or in a garage.

There were rental car companies, but the fee structure was such that it eventually was cheaper just to buy a car than to rent one. You could pay in a week for a rental what a car cost to own for a month.

The door cracked open in 2007, when ZipCar came along. Now, you didn’t have to rent for a week, or a weekend, or even a day. You could use a ZipCar for a few hours, then take it back.

Now, you don’t even have to take some car sharing cars back. Nor do you have to go anywhere to find transportation. You simply summon it, use it as long as you like, and go wherever you like.

The app that is leading the way in this change is Uber, and it promises to transform the way we get around in the way that the automobile did a century ago. There’s a fascinating look at how this is happening by Kevin Roose in New York Magazine. END_OF_DOCUMENT_TOKEN_TO_BE_REPLACED

Comments Off on Transforming The Way We Get Around, From Your Phone

A Top Technology Journalist Looks At The New Transportation World 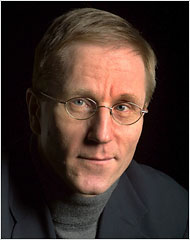 Rethinking how we get around is, among other things, a commitment to sharing. Sharing vehicles, sharing space and, most critically, sharing information.

If sharing is intrinsic to rethinking the way we get around, how are the masters of the information world taking part?

For insight, we turned to a master of information-age journalism: Steve Lohr, the senior technology reporter at The New York Times and a long-time colleague of mine and Micki Maynard’s. He was part of the 2013 team that won the Pulitzer Prize for its look into Apple’s business practices.

As a reporter whose job it is to cast a skeptical eye on the frenzied start-up scene, Steve has always invoked a test of scalability: Does a project have what it takes to grow efficiently and exponentially?

We asked him how the tech world is viewing the new world of transportation. He told us:

“My technologically astute friends who spend a lot of time in cars are big fans of Waze, a crowd-sharing traffic and navigation app.

In case you haven’t heard of Waze, it is what is known as a social mapping service. The basic idea is that users voluntarily allow the GPS data from their smartphones to be gathered and shared, but stripped of personally identifying information. The result is a smartphone application that shows local traffic, congestion and suggests alternative routes. The Waze tagline is: “Outsmarting traffic, together.” END_OF_DOCUMENT_TOKEN_TO_BE_REPLACED