My girlfriend and I visited San Antonio for a weekend in October. Both of us are frequent bicyclists. Missing our usual morning rides, we decided to try the San Antonio B-Cycle program.

We were impressed on Friday night by the number of bicyclists we saw near where we were staying. There were bike lanes by all the bars we visited, and full bike racks.

Saturday morning, we picked up our bikes from a B-cycle station near the southern extension of the San Antonio River Walk, on East Cesar E. Chavez Blvd. It was $10 for as many 30 minute rides as you could take in one day.

The heavy bikes have three speeds and rear brakes. Word to the wise: don’t carry them up stairs unless you have to.  The basket was perfect for carrying snacks, cameras and water. I was unaccustomed to riding with weight in front, but it was a quick balancing act to solve. END_OF_DOCUMENT_TOKEN_TO_BE_REPLACED

We Want To Hear Your Stories. Write For Curbing Cars

We’ve had student written stories from all over the country. Join our stable of writers.

Curbing Cars is telling stories of how people are rethinking the way they get around. And who better to tell those stories than you?

We offer these opportunities for you to write for us. Send your ideas to curbingcars@gmail.com. All submissions should be 500 words or less. We welcome photos and video. Include a phone number in case we have questions.

Before you pitch us a story, read the Columbia Journalism Review cover story about us.  Also, take a look at our site so that you don’t duplicate a story we’ve already written. We also do not accept stories that you have written for other publications, except your own blog.

Here are the categories where you can write for us. (Note: we only pay for student-written stories.) END_OF_DOCUMENT_TOKEN_TO_BE_REPLACED

Comments Off on We Want To Hear Your Stories. Write For Curbing Cars

Bicyclists: How Strongly Do You Feel About Wearing A Helmet?

These Bixi riders and cyclists at lunch in Montreal. Notice that only  one of them is wearing a helmet.

A few weeks ago, Curbing Cars supporter Michael Leland wrote about his experience using Capital Bike Share in Washington, D.C. Michael is an avid cyclist who always wears a helmet at home in Madison, Wisconsin, but he didn’t have one with him during his trip. That caused him a little discomfort in using the system.

We’re wondering how strongly you feel about wearing a helmet when you cycle. Is it a must for you? Or, do you skip one on occasions when you’re taking a short trip, or using bike sharing?

Please take our poll. If you feel particularly strongly about this, we’d love to hear your helmet thoughts. Add them in comments, or email us at CurbingCars@gmail.com if you’d like to say more.

Comments Off on Bicyclists: How Strongly Do You Feel About Wearing A Helmet?

A Tale Of Two Cities – And Two Bike Sharing Systems

As bike sharing gets more popular, public health officials are concerned people are on bikes without helmets.

A row of Bixis stands waiting for lunchtime riders in Montreal.

These Bixi riders and cyclists at lunch in Montreal. Only one of them is wearing a helmet.

At rush hour, just one Bixi was available near the Atwater station of the Montreal Metro.

One lone Bixi bike in Toronto.

During my week in Montreal and Toronto, I had my eye out for evidence of bike sharing. I didn’t have to look far in Montreal, which is considered one of the world’s top bike friendly cities. Toronto was a much different story.

I’d booked my Montreal hotel near the Atwater Metro station in Westmount, the traditionally English part of the city, because I wanted to get around with ease. Upon checking in, my hotel clerk handed me a neighborhood map. “Here is the Metro station, you just walk two blocks down the hill,” she explained. “And here are the Bixis.”

In fact, it hadn’t even taken me that long to find them. As soon as my taxi pulled out of Montreal’s central station, I spotted a man on a Bixi waiting at the light.

Over the next few days, I spotted Bixis in all the neighborhoods I visited, at all times of the day, even late in the evening after I was coming back from dinner. People rode Bixis to lunch, and to work, and out for drinks. Late one afternoon, I passed the Atwater Bixi dock and found it held just one bike — all the others were in use.

Ahmed El-Geneidy, associate professor at the School of Urban Planning at McGill University, smiled when I told him that. Montreal, he explained, is the equivalent of a model home for Bixi, the bike sharing company that dominates the world market. It constantly brings visiting civic officials to the city to see bike sharing in action. So, naturally, Bixi docks and bikes are plentiful.

It was not the same in Toronto. END_OF_DOCUMENT_TOKEN_TO_BE_REPLACED

Bike Share Review: Getting Around The Mile High City

Denver is known for its Nuggets, the Broncos and its mountains. But many of us don’t automatically think of it as a bike sharing city. 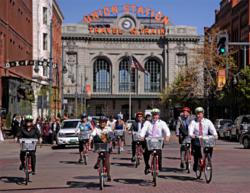 However, the system known as Denver B-Cycle has a regular rider in Tim Baldwin, an associate with the transportation consulting firm of Steer Davies Gleave.

“Our firm recently moved to a new office in the Lower Downtown area of Denver.  While it is a beautiful office in a wonderful location, it is about four blocks away from Denver’s 16th Street Mall and its free shuttle bus, which we use to get to and from meetings around downtown (primarily at RTD-Denver and the City and County of Denver).

Luckily, we have a B-Cycle bike sharing station right outside our office, so we use it at every opportunity to go to and from our meetings. END_OF_DOCUMENT_TOKEN_TO_BE_REPLACED

Comments Off on Bike Share Review: Getting Around The Mile High City

Last month, I visited Chicago to check out Divvy Bikes and see what cyclists think of the new bike sharing program. As I was driving through West Town at lunch time, I saw Roger Guerrero cycling by, and asked him if he’d talk to me about his Divvy experience. Click the link above to hear our interview.

Here’s Roger on his ride.

(*Slight correction in the audio: Bay Area Bike Share stretches from San Francisco to San Jose, but Oakland isn’t part of the system just yet.)

Comments Off on Bike Share Review: A Lunchtime Ride In Chicago Curbing Cars backer Michael Leland is an avid cyclist who spends lots of time on the road in Wisconsin, where he is the news director for Wisconsin Public Radio.

In our inaugural Bike Share Review, Michael writes about his experience testing out Capital Bikeshare in Washington, D.C.

“A few years ago, I was staying in Crystal City, (Arlington), Virginia for a conference, and there was a Capital Bikeshare station in front of the hotel.  I bike a lot at home in Wisconsin and try to exercise when I’m on the road, so I thought it would be nice to use on of the bikes for early-morning rides along the Potomac.

The station instructions were straightforward and I was easily able to adjust the bike so that I fit on it comfortably.  Several mornings that week, I rode a 6-10 mile loop along the river, and crossed into D.C. to ride past the Lincoln and Jefferson Memorials. END_OF_DOCUMENT_TOKEN_TO_BE_REPLACED

Comments Off on Bike Share Review: Riding In The Nation’s Capitol

Have You Tried Out Bike Sharing? Send Us Your Bike Share Review

It’s been the summer of bike sharing! This week, Bay Area Bike Share (or as we’re thinking of it, BABS) kicked off in the San Francisco area. Meanwhile, Chicago is getting to know Divvy Bikes, and New York has thrown its arms around Citi Bike.

They’re just part of the bike sharing movement that has literally swept the world, from Paris to Shanghai, Montreal to Chattanooga. College campuses have bike sharing, and so do many cities around North America.

Have you tried out one of these systems, either in your home town or as a visitor? If so, we’d like you to send us your Bike Share Review.

As we’re doing with My Transportation Diary, we’ll be running these regularly at Curbing Cars. Our first one is ready to go this weekend.

Comments Off on Have You Tried Out Bike Sharing? Send Us Your Bike Share Review