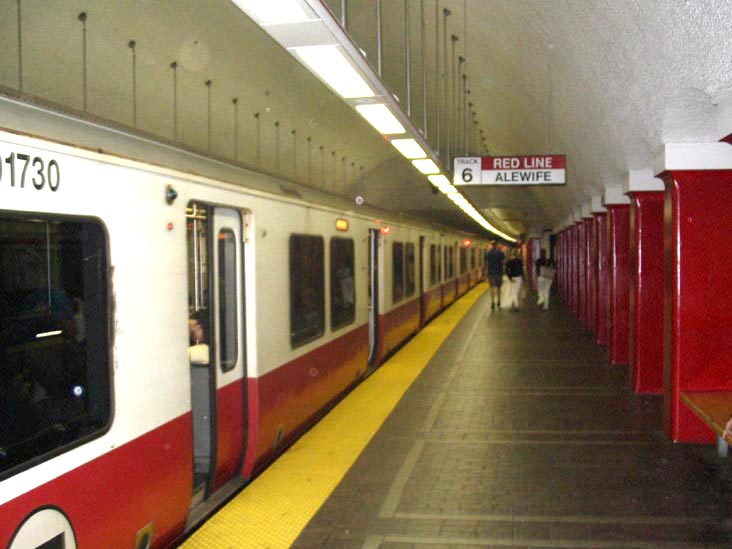 A Red Line station on the T.

Boston is a big city for public transportation. Fewer than 50 percent of trips take place by private car, meaning Bostonians rely on a portfolio of walking, bicycling, ride sharing, and most important, the Massachusetts Bay Transportation Authority, better known as the T.

But the T isn’t open 24 hours, to the frustration of many Bostonians, both those out enjoying the city at all hours, and those whose jobs require them to commute late at night and early in the morning.

The two leading candidates — Councilor at Large John Connolly and State Rep. Martin Walsh — weren’t ready to commit to backing 24-hour T service, in part because the city might not be able to pay for it on its own. However, each said longer hours were important to the community.

That brings up the question: does a world class city require its transit system to be able 24 hours a day?

It doesn’t in a surprising number of places, including Tokyo and Washington, D.C. London trains shut down around midnight in most places. New York’s system runs all night, but you can have an hour long wait for a train. In San Francisco, the BART system shuts down from about midnight to 4 a.m.

In those midnight hours, passengers have to resort to other means to get around, either their own two feet, or taxis. When I lived in Tokyo, stories were rampant about the high prices that taxi drivers charged people who missed the last trains. I was told to count on paying triple the meter.

Because Boston is so much smaller than the world’s major capitols, it might be an easier process to keep the T running all night long. On the other hand, would people actually ride it?

Compare the answers of the Boston mayor candidates, courtesy of State House News Service, and tell us what you think about 24 hour transit.

QUESTION: Should the city provide more of its own funds to expand service on the MBTA to include later service? How much and for what services?

JOHN CONNOLLY: I would be open to considering the use of city funds to expand service on the MBTA to include late-night service. Late-night service would help workers in healthcare, public safety, hospitality, and other industries who don’t work weekday hours, and it would provide residents with a safe, reliable, affordable way to get home after enjoying Boston’s culture and nightlife. It makes no sense not to provide this service now. But we must make certain that city funds will supplement, not replace, state funding, and that’s why as mayor I will also use the bully pulpit of the office to fight for every possible dime of state funding for the MBTA.

FELIX ARROYO: We rely on four basic modes of transportation – the car, public transportation, biking, and walking – and we need to make sure that each of those choices is accessible to all of Boston’s residents in an equitable and safe way. A public transportation system that runs 24 hours a day will help promote economic growth, retain more of our young talent, and provide a vital service for the men and women that work in our buildings at night. I believe we need to reform our transportation system and to fund investments through a progressive tax that does not place the burden on those who can least afford it and does not rely on more funds from the city.

BILL WALCZAK: Because of the nature of the MBTA, I believe funding should come from the state and
federal levels. The MBTA is not relegated to Boston, it is a regional issue, one that pertains to outlying cities and towns as far as Worcester and Lowell. I support extended 24-hour transportation, but considering the fact that transportation is not relegated to city operation, the state has an obligation to provide funding for extended runtime.

MICHAEL ROSS: In 2001, working with partners in state government and the community, I led the fight to implement the MBTA’s “Night Owl” bus service, which extended public transit service in Boston until 2:30 a.m. As mayor, I’ll bring that back. To fund this service expansion, I will work with our area universities to implement the U-Pass program, which lets those institutions purchase MBTA passes for every one of their students at discounted rates. The independent MBTA Rider Oversight Committee has said the U-Pass program has the potential to generate close to $50 million in revenue for the MBTA, more than covering the estimated $10 million cost of renewed and expanded late night service.

JOHN BARROS: To extend service hours I will work closely with the Governor to fully fund the MBTA capital program and put the MBTA on sound financial footing, while strongly advocating that the MBTA needs to be affordable and safe for all residents of Boston. In order to help make late night service a reality Boston needs to be a partner in helping to increase usage of public transit. To help increase ridership, I will work towards the implementation of a U-Pass for all university students in Boston through bulk purchases of passes by universities. In addition, I will provide more incentives to increase residential and commercial density along the transit nodes.

DAN CONLEY: I support extended hours for the MBTA. This isn’t only about extending Boston’s nightlife hours, but also about providing affordable transportation to tens of thousands of people who care for patients, serve customers, clean buildings, and maintain Boston’s infrastructure while most of us sleep. I do not support using city funds to pay for this, however. The MBTA is a quasi-public authority over which the people of Boston have no direct authority or control. It serves a large and growing Boston regional population and economy. Transportation is a pro-growth strategy for the entire state and should be treated as such.

ROB CONSALVO: As a vocal advocate of public transportation, I will continue to work closely with transportation officials to ensure public transportation remains accessible, reliable, and affordable to all. The city of Boston has numerous budget priorities, and while efficient and effective transportation is certainly a priority, the cost of expanding service on the MBTA is well beyond our other priorities. I will look to form public-private partnerships to help generate funds for transportation and to hold the corporate community accountable for improving the quality of life in our city. Also, I will advocate to the federal government for more transportation funding for our city.

MARTY WALSH: As a 16-year veteran of the House, I am uniquely qualified to negotiate transportation plans with the legislature. Expanding and extending MBTA service could benefit the City of Boston but is not something toward which we can direct City revenue. The decision has to be driven by MassDOT at the state level and funded by the state. The benefits of the services the MBTA provides are shared by Boston and its neighboring municipalities; therefore the cost should be shared as well. The state is the proper vehicle for funding. As State Representative for Dorchester I’ve worked to open or renovate four of the red line stations and believe we can find a cooperative way to increase and improve service to neighborhoods throughout the City.

Comments Off on Does A World Class City Require 24-Hour Public Transit?